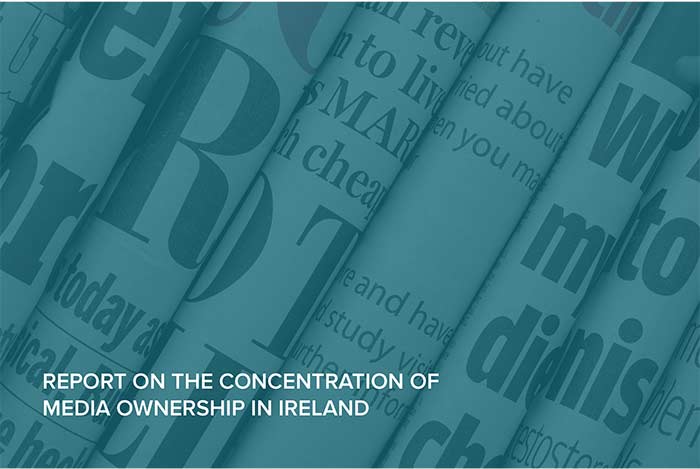 The full report is available in PDF format

The Republic of Ireland has seen a steady decline in media plurality, according to the authors of a new report.

The recent Report on the Concentration of Media Ownership in Ireland, published on 19 October, examines the importance of pluralism as a representation of the percentage of diversity in viewpoints and opinions that get reflected in a nation’s media content.  According to the report the country has one of the most concentrated media markets, with wealthy media owners possessing the influence to skew the news report for personal gain. The authors — Caoilionn Gallagher and Jonathan Price at Doughty Street Chambers, Gavin Booth and Darragh Mackin at KRW Law, and commissioned by Lynn Boylan MEP– drew on a variety of studies to compile the report including research from the Centre for Media Pluralism and Media Freedom’s Media Pluralism Monitor (2015).

CMPF created a Media Pluralism Monitor to measure whether a country is a “high risk territory” on a scale of 0% to 100%, with “high risk” countries falling at 74% or above. Researchers based in the 19 countries covered by the monitor collect data points that include protection of journalists, number of media outlets, political independence and social inclusiveness among other indicators.

In 2015 Dr. Roderick Flynn, of Dublin City University, generated a report on Ireland for CMPF’s Media Pluralism Monitor which found there was a “medium risk” (54%) of market plurality, and specifically “very high risk” (74%) in relation to the “concentration of media ownership”. Based on Flynn’s research it was concluded that, largely, the media concentration stemmed from businessman Denis O’Brien, founder of Communicorp, owner of a significant minority stake in Independent News and Media and a large portion of the commercial radio sector. The October report called O’Brien’s ownership and influence in media outlets a concern. Additionally, Doughty Street Chambers and KRW Law highlighted the Irish defamation law as a key issue “which threatens news plurality and undermines the media’s ability to perform its watchdog function”.

Though Flynn’s study and the Doughty Street Chambers and KRW Law report clearly point out significant issues, which have been further discussed with organisations such as the National Union of Journalists and the EU Commission, it also proposes ideas for revisions. The report states the “firm view that there must be detailed multi-disciplinary analysis and careful consideration before any steps are taken”. The authors of the report suggest that the Irish should “establish a cross-disciplinary commission of inquiry”, which would “examine the issues closely and make concrete recommendations.” Additionally the authors ask the Council of European Committee of Experts on Media Pluralism and Transparency of Media Ownership to work within the parameters of the European Convention on Human Rights (ECHR), a treaty that “the right to [business] property is heavily caveated under”. Consequently, by utilising the ECHR, the committee could spur a decrease in the media power of business moguls such as Denis O’Brien. Along with further modifications, the study indicates that these alterations are necessary to maintain media plurality in Ireland.