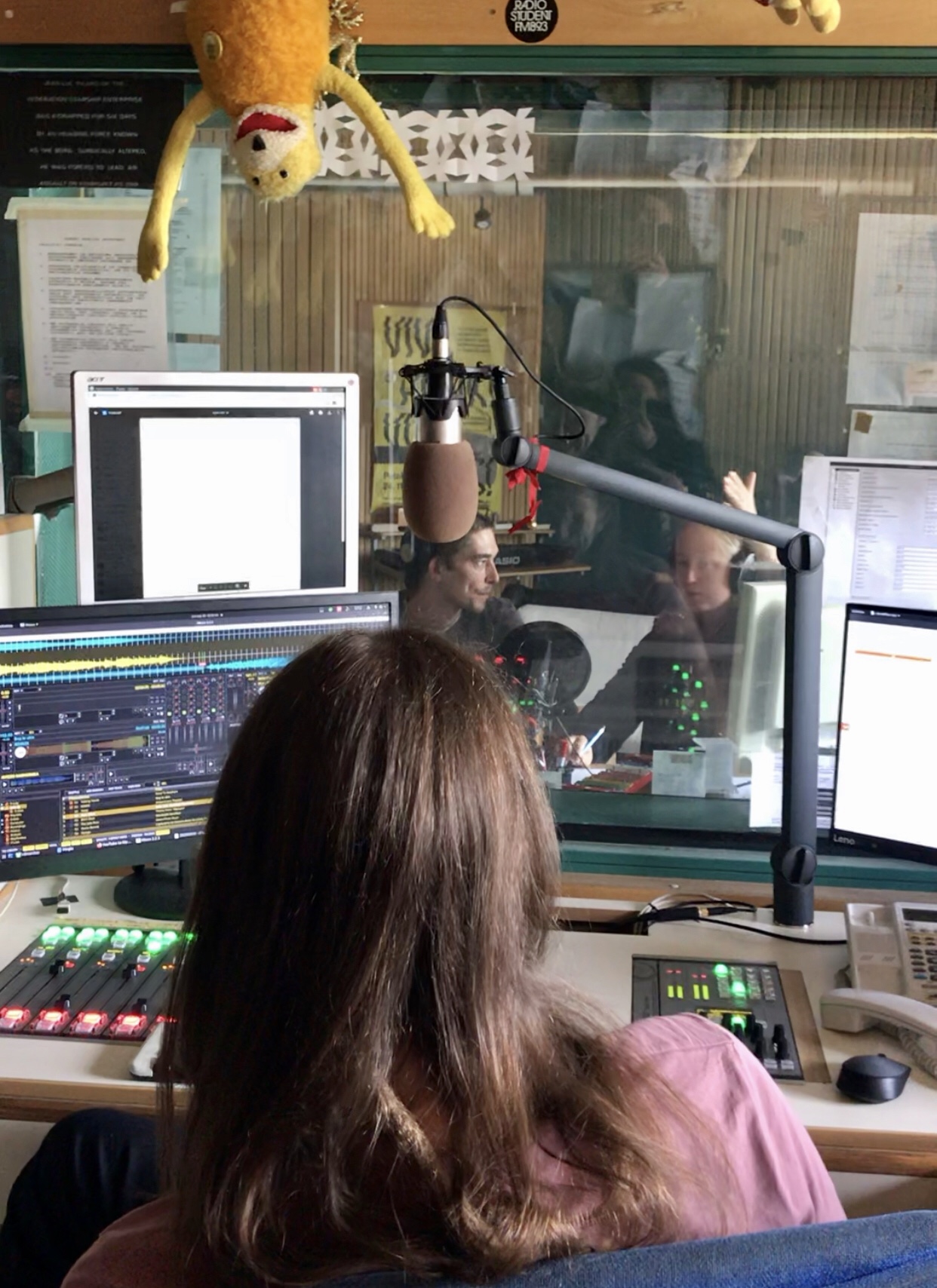 #ReportIt: “We will continue, no one can change this”

By Roberta KnollJuly 6, 2021 No Comments

Home » #ReportIt: “We will continue, no one can change this”

From 100,000 € to zero – that’s the sad result for the Slovenian Radio Študent looking at the cut funding from the Slovenian Culture Ministry for 2021. Founded in 1969, Radio Študent is one of the oldest non-commercial radio stations in Europe and looks back on a rich history. Now, the future of the radio station with its broad educational platform for students and prospective journalists is at stake.

How did it get this far and what effects does this cut in funding have on the radio station’s future? We are talking with Matjaž Zorec, who is the editor-in-chief.

ECPMF: Matjaž Zorec, first – why is Radio Student so unique in Slovenia and in Europe?

Matjaž Zorec: Radio Študent is the oldest independent radio station in Europe. We were founded in 1969, after the student protest in 1968. The existence of Radio Študent is a direct result of the demonstrations. One of the demands of the students back then was to have their own media, to have a voice and for discovering and hearing new and different music. The uniqueness of Radio Študent composes on one side of being a student radio and on the other of being a community radio which includes minorities and other vulnerable groups. What distinguishes us from other community and student radios is the very high quality and quantity of our program. We air 24/7, we have 17 hours of live programming each day and we have a very diverse programme comprising five editorial boards: music, current affairs, culture, university, and science.

We have a very diverse programme with daily news, cultural news; we are one of the rare media in Slovenia that has a daily art critique. Plus, we have a daily music critique of records and of concerts. The current affairs programme covers domestic politics but also foreign politics, which are usually not represented in the mainstream media.

Besides our radio programming we are also a music and cultural producer: we organize festivals, we have our own music label. Additionally, we are organised as an NGO. Besides that, we have another line of programming that focuses on minorities, LGBTQI communities and migrants. Many parts of our programming have been award-winning for example, our show “Lesbomania”, about the lesbian scene in Slovenia.

ECPMF: Regarding the threat of a cut in funding first by the Student Organisation of the University of Ljubljana, SOU, being an issue in January this year, did you expect the loss of funding by the Culture Ministry?

Zorec: No, of course not. We had our problems with our founder SOU. Last year, when a lot of cultural producers and media already had many problems with the current ministry, we were one of the rare institutions that had a meeting with the Minister himself. The signals were positive, they showed understanding for our problems.

Even more, the Minister himself had an interpellation in Spring at our National Assembly. He denounced as a lie that they are cutting Radio Študent. However, the results of this media funding call came the following month, and we were of course very surprised. We were quite shocked because we didn’t expect that at all.

We thought that Radio Študent, with all its history, with all the good work and not being politically affiliated with anyone, could be the one thing that our daily politics could unite about. Of course, this turned out wrong. Before, we thought perhaps we are not close enough to the political view of the Ministry, we may get less funding, maybe 80 % or 70 % which would have been reasonable to some extent. But to completely cut us off from this funding is a total catastrophe, not only for Radio Študent.

The government’s misconception of the media

ECPMF: Do you think the decision was politically motivated?

Zorec: Of course, our interpretation and why we made this public is that this decision is not a decision of a committee of media experts, but politically motivated. This media funding call is being made every year. And every year, either under a right or left government, Radio Študent ranked very high on the scoreboard for the funding. Last year, we got the highest amount of money in our category. Our category is called “programmes of special meaning”. And this call for special media projects is supposed to help this kind of programme. We are the only ones with student status, others have local status. Usually, all these programs were co-financed. This decision, that some of us didn’t get the financing, while other special programmes got the financing, is political in our view.

What is the motivation behind this decision?

Our current Minister, our current government, and our current leading party see the media as a further means of doing politics. They consider the media to be a factor affiliated with political agenda.

There is no deeper meaning behind it, they are shamelessly pragmatic about it. Their philosophy is “you got your money last year, this year we will give the money to ‘our’ media.”

The lack of understanding of the purpose of the media as such is quite shocking although not surprising.

ECPMF: Do you recall the emotions, feelings, and atmosphere at Radio Student when this news reached you?

Zorec: As you can imagine the atmosphere was not very joyful. This cut in funding came really unexpectedly. We were thunderstruck, that took us by surprise. However, on the radio, as a team, we have a wider community, not only the employees but also around 200 students and others who co-produce our programme, plus the wider community of Radio Študent which is older than 50 years. And we even have the support of generations that are not yet part of Radio Študent but are currently auditioning.

Our social strength as a team, as a community, gives us power to overcome anything. We will overcome this hurdle. This ministry couldn’t cancel us even if they wanted to. We will outlive the current Minister and his team.

ECPMF: Considering the long history of the radio station – has anything comparable happened before?

Zorec: Radio Študent always had some battles in the past with authorities regarding finances. There were some troubles in our former country, we traditionally have problems with our founder SOU.

However, I don’t remember such a shock therapy like the one we are being treated with right now.

The lack of support the Ministry is giving us now, has never happened before. Even the old so-called totalitarian regime showed more understanding for the media, for Radio Študent, for what we are doing, for what we stand for, than this current government.

ECPMF: How dependent are you on that money? How will it affect your diverse programming?

Zorec: This co-financing was mostly to cover the cost of our programmes, the news, the music, the cultural programme, the technicians, our speakers, basically everything. Our programme is produced by around 200 co-workers, who do their work for a symbolic fee, but a fee nevertheless, as Radio Študent always pays. The loss of co-funding means that we must radically reduce our main programming in autumn.

ECPMF: What other practical consequences will that have on your work and the educational aspect of Radio Študent?

Zorec: Since we are also an educational institution, we have annual auditions for our journalists in our fields for music, culture, politics, university, and science. In this audition, we get around 30-40 new journalists and around 10-20 new technicians and speakers every year. But the problem is that we train through learning-by-doing. So, this programming for which we lost the co-founding is our main means of education. Journalistic, technical and speaker education is being done mainly through our programming. Thus, our educational factors will suffer.

ECPMF: You filed a lawsuit against the ministry’s decision, although success would not automatically ease the situation, in light the proceedings’ length. What do you expect from this action?

Zorec: We filed a lawsuit last Friday [11 June 2021]. This was the only legal means to dispute this decision. We are quite confident that we are right on this point and that we will win this lawsuit. If so, there is firstly the question of how long the process will take. Secondly, if the result is the annulment of the media call, it would be put back into decision-making. However, the same committee and the same Ministry would decide. I don’t know if we can expect a different result. But no matter, we felt obligated to sue the Ministry, we are confident in our programming, we are confident in the quality that we applied with, and I am quite confident that we will win.

ECPMF: How do you imagine Radio Student’s future now?

Zorec: I imagine the future the same as it has always been. We will continue our work. Our strength is – pathetic as it sounds – our people working here, our strong community, and even when I, or our current director are gone, others will come to whom we will pass the torch.

Radio Študent will remain an important domestic, regional, and international progressive media and NGO, who fights for the rights of students and of marginalised groups. This will not change. No one can change this. 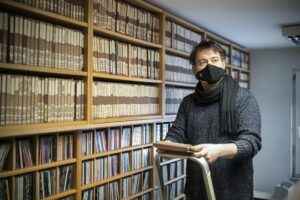 Matjaž Zorec, generation of the Chernobyl disaster, is a long time associate of Radio Študent and its’ current editor-in-chief. A writer, critic, author of a book of poetry and a radio show literary incest.