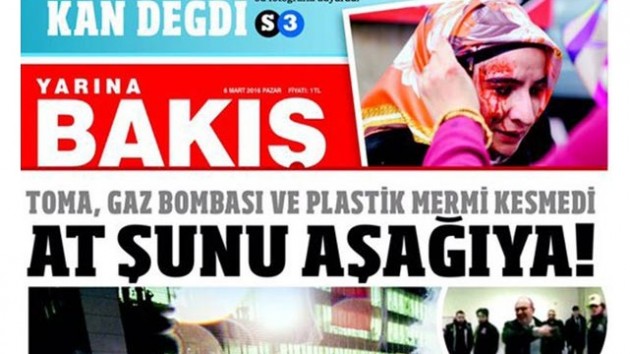 On Tuesday 19 July, Turkey’s independent and critical journalists, academics and law experts woke up to another day of concern and fear.

The uncertainty is driven by the lack of assurances on media freedom or even a basic respect for the rule of law. At a time when the country is purging its administration of alleged coup plotters, its leaders should be calming nerves and calling for transparency. On the contrary, President Reccep Tayyip Erdoğan and Prime Minister Binali Yıldırım appear to be in favour the reintroduction of the death penalty.

The media is the most fragile element in the middle of the mess.

Arzu Yıldız, a rigorously independent expert reporter on judicial affairs, was one of the first to feel the heat. An arrest order — with no reason given — was issued against her but the police who came to her flat early on Monday morning were unable to find her. She later tweeted that, since she “had nothing to fear” she would surrender to the police. So far, no further news has been heard about her.

Colleagues I spoke to share the view that by silencing such an expert reporter the authorities may be intending to erect a wall to hide what has been “really” happening — what many of us see as a massive purge within the judiciary — where more than 2,500 members (judges and prosecutors) are sought under a mass arrest order. Yıldız knows many of them, who they are and what they stand for.

Hours after the collapse of the coup attempt, a long list of journalists “to be arrested” went into circulation. Most of them are either editors or columnists — mainly liberals and leftists — who have been writing for newspapers as Özgür Düşünce, Yarına Bakış and Yeni Hayat. They have all now been smeared as affiliates of the Gülen Movement. Can Dündar, the editor of Cumhuriyet daily, is also among those targeted.

Since the day after the bloody coup attempt a media blackout has spread. More than 10 news websites have been shut down. On Monday night it was reported that several print houses refused to print Yarına Bakış and Yeni Hayat dailies, with no reason given. The editors feel that political pressure or fear lie behind them. Yarına Bakış issued an editorial online stating that it was forced to suspend its print edition, citing oppressive measures. On Tuesday, the liberal Özgür Düşünce daily, many of whose columnists found themselves to be victims of the witch hunt, announced it was also considering discontinuing its print edition. The independent website Haberdar, that was the first to break the coup attempt story, is to radically downsize, closing its newsroom and firing staff, according to inside sources.

There seems to be agreement among Turkey’s down-trodden, critical journalists and their foreign colleagues that the “dark times” will be long lasting and it may spell an end to independent journalism altogether.

Many fear a crackdown will sweep through the Turkish and Kurdish media. There are concerns over the closure of one free outlet after the other, the financial struggles these organisations face and the journalists forced into unemployment, declared as “public enemies” or “pariahs” and left without mediums to report and comment. The situation could not be any more serious.

A version of this article was originally posted to Suddeutsche Zeitung. It is published here with permission of the author.

A noble profession has turned into a curse