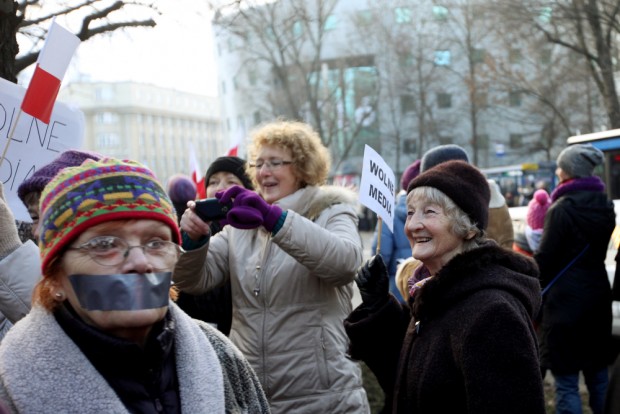 9 January, 2016: An anti-PiS demonstration in Kraków by the Committee of the Defence of the Democracy calling for a free media. Credit: Shutterstock / praszkiewicz

Poland has undergone rapid changes since the right-wing Law and Justice party (PiS) won the overall majority in the Sejm, the country’s parliament, in October 2015, and independent media hasn’t been spared.

On the evening of 28 December, draft legislation to change the management of public media was submitted to the Sejm and hurriedly passed with little public discussion and despite the objections of EU and media monitoring watchdogs — including Index on Censorship. The bill was signed into law in early January 2016.

Even before the parliamentary debate on the bill, PiS MP Beata Mazurek let it be known that it was her “hope that, at last, the media narration which we disagree with, will cease to exist”.

Crucial sections of the media law empowered the government to appoint editors-in-chief at public radio and stations, Polskie Radio and TVP, rather than holding an open competition for the roles. Furthermore, the law ended member rotation on public television’s watchdog committee and symbolically re-branded “public media” as “national media”.

Immediately after enacting the law, the government named Jacek Kurski — a long-standing PiS member who represented the party in the Sejm between 2005-2009 and in the European Parliament until 2014 — as the new chair of TVP. He promised a “fast recovery” of public media on taking the role.

In speaking about the law, PiS representatives have said that the media had been under heavy influence of the Civic Platform (PO), the former governing party. In an interview with the Catholic Radio Maryja and TV station Trwam, defence minister Antoni Macierewicz said: “PiS does not take freedom of speech away from anyone, it is much rather the opposite: it returns the freedom of speech to the majority of the population, which had been deprived of it.”

The electoral success of PiS has been used to frame the changes to the media law as an expression of the public will.

The national daily Gazeta Wyborcza, which in 1989 was the first newspaper published outside the control of Poland’s then-communist government, and its workforce took these changes very seriously and set up an advertising campaign focused on the new legislation.

The changes to the media law raise a fundamental issue for media aligned to the political left or centre, as well as those with pro-European or liberal positions: financing.

Paweł Grzegorczyk, editor-in-chief of the online portal jagielloński24, conducted an analysis of public funding channelled to media outlets in recent years. In an interview with the Association of Polish Journalists (SDP), he said that Gazeta Wyborcza is likely to face a challenging financial future. Regardless of which party is in power, media funding is “usually steered, while not exclusively, by political motives”, he added.

He noted that right-wing publishers, under PO rule, had received less funding both with regards to the amount of publications (only two between 2009-14) and monetary value, than publications closer to the former government. While overall figures are not published, Gazeta Wyborcza received PLN 5 million ($1,284,076) between 2010-2014. Grzegorczyk said it wouldn’t be unreasonable to see this amount diminish in future.

Since PiS gained a majority, advertising by state institutions has soared in a number of media aligned with conservative political viewpoints, and the oil refinery company Orlen is sponsoring some news programming on Telewizja Republika, according to Grzegorczyk.

Commentators have been cautiously optimistic about the changes to the media law, calling it an opportunity to shake up dysfunctional structures in public media. “It was never as bad with the TVP as it is now, and it will never be as bad again,” wrote Stefan Turszczynski, a journalist and SDP member. Jadwiga Chmielowska wrote that Polish television has been destroyed in a 20-year process and the new media law “constitutes a chance” for change. Despite the optimism, some TVP journalists have already been dismissed.

So far commentary has focused the media law’s effect on Polish TV because Poles, on average, watch 4.23 hours a day, a Europe-wide high.

The Press Freedom Monitoring Centre (CMWP) issued a statement appealing “to editors-in-chief of public stations to pay particular attention that personnel changes would exclusively be motivated by criteria of professionalism of certain journalists or media employees”, rather than be based on family relations or political considerations.

In an interview with news-servis.pl Witold Świetlik, chair of CMWP, appeared unconcerned about the changes given that “the public media have never been that good in Poland”, and had increasingly been influenced by the surroundings of former President Bronisław Komorowski. Something had to change, and Świetlik was hopeful to see more pluralism of opinion than there was on TVP previously. One example he cites is the TVP talk show hosted by journalist Tomasz Lis, who was one of the first to leave the station following the introduction of the new media law. While Świetlik’s “fundamental doubt” concerned the fact that a politician is now leading the TV station, he noted that Kurski has so far “set up a rather neutral and pluralistic composition”, while admitting that the workforce was, “of course, predominantly made up from journalists of the conservative media”.

The position heard directly from associates of the SDP on the state of Polish public TV was very negative prior to the new law being passed. Former TVP1 departmental editor-in-chief Ewa Urbanska argues that the leasing structure set up a few years back had a detrimental impact on quality of coverage while a large body of administrative staff continued to be supported by public money, and, crucially, any production was left to commercial firms.

Outside criticism of the media landscape in Poland is rejected by some, such as the lawyer and journalist Andrzej Draminski. He is amused by the agitation of “oppositional groupings and various committees in defence of one thing or another (here you can insert any title as this really does not make a difference)” and warns the opposition not to buy in to the “sudden”, shallow interest of the West, and instead to present arguments of their own, “so far as they have any”.

The issues affecting journalism in Poland predate the changes to the media law. The industry has been grappling with accusations of becoming too simple and partisan from its own professionals. Marek Placzewski from the SDP says while there have been a few notable exceptions, the general trend in the press has been to recount right- or left-wing arguments without an attempt to move beyond these narratives.