Home » #ReportIt: The challenge of reporting in the throes of police violence, protests and deportation

#ReportIt: The challenge of reporting in the throes of police violence, protests and deportation 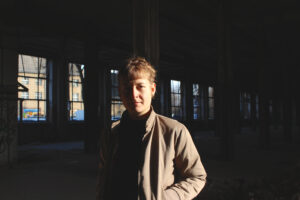 In the dead of night, between 9 and 10 July 2019, local police in Leipzig, Germany arrived to deport a Syrian refugee. In his defence, neighbours and other members of the community arrived at the scene to try to stop the deportation of the young man. Nina Böckmann, a freelance journalist specialising in reporting on far-right extremism, in Germany, was one of the first members of the press to arrive at the scene. Böckmann was just observing and reporting on the chain of events for her job. But what she did not anticipate was the pushback and violence she faced at the hands of the police, obstructing her from doing her work.

Two years after the incident, the European Centre for Press and Media Freedom got in touch with Böckmann for #WorldRefugeeDay. Unfortunately, the challenges of reporting when it comes to the subject of refugees persist and the situation is deteriorating. Here is Böckmann’s story:

ECPMF: Could you tell us what happened that day?

Nina Böckmann: That day I got a message, fairly late, saying that there might be a deportation happening in Hildegardstrasse. So, a friend of mine who is a photographer and I went there to see what the situation was like. I think there were six police officers there at the time I arrived and a number of people were already observing the situation.

And as soon as I got there, there was an ambulance and police officers brought the man, who was to be deported, to the van. Police officers then started to push me – even though I was repeatedly showing my press identification. And [the protest] just started to get bigger and bigger and people started to sit in front of the police car to stop them from deporting that person.

The situation for me as a member of the press was tense all the time.

I got annoying comments from police officers. They did not want to let me pass through the police line [blocking the demonstrators] even though I had my press ID. I don’t know exactly how many people there were, to be honest, because it was fairly hard to get an overview of the whole situation but it got tenser.

More police arrived. More protestors arrived and it [escalated] to a situation where people started to throw bottles and [the police] were pushing people around. I was pushed to the ground by a police officer, [whilst] standing next to other press people who were definitely easy to identify as press. So, that was that and then they tried to get the car – the car we suspected was holding the person who was to be deported – out of the whole situation and the mass of people.

[This was the turning point] when everything escalated. Police used pepper spray indiscriminately, I saw at least one person lying on the ground who was unconscious.

I myself got pepper-sprayed straight in my face. Even though, again, I was holding my press ID above my head so it was visible to everyone.

ECPMF: What happened to you afterwards in the immediate aftermath? Could you continue reporting?

Because of the pepper spray, I left after the situation escalated.

ECPMF: What unique challenges have you experienced when reporting on refugees or migrants compared to other reporting assignments?

Böckmann: [In the case of reporting on deportations] the first challenge really is to figure out when someone is being deported because [due to the law] no one is going to tell the press person. And even though this is the only deportation I have reported on, the police are not really interested in having press people around. And what I experienced in that situation, from the first moment they tried to block me.

They did not take me seriously and pretty much violated my rights.

ECPMF: Did you expect such a reaction from the police?

Böckmann: It definitely was not the first situation in which I was attacked by the police, as a journalist or member of the press. That has happened before, especially when it comes to protests or right-wing activities [one of Nina’s main journalistic topics] but I usually don’t like to think of it because it happens so regularly. I should say that that is also part of the problem.

When I talk to colleagues they all say the same but most of them say we don’t have the time and the energy to report every single situation [of police or protestor violence] that has happened to us.

This is definitely one of the major challenges when it comes to reporting on deportation.

ECPMF: In some weeks, it will be two years since the Hildegardstrasse deportation. What has happened since then for you, how did this incident affect you?

Böckmann: Personally I had two different experiences after that. Firstly, the positive one is that lots of colleagues came forward and told me that they are supporting [me]. And they said if I would need anything they could help and just wanted to let me know that I am not alone. And the other experience was, I remember quite well, there was another demonstration a few days after [the Hildegardstrasse deportation]. And there were police officers around who kind of gave me a knowing look when they saw me. I reckon they must have been around at the deportation as well. So, it was kind of this weird situation where they were making it clear that “we recognise you”.

And of course, trusting the police as a member of the press does not become any easier after what happened.

ECPMF: How did you feel about being a freelancer at the time? Did it make you feel more or less safe reporting on this deportation?

Böckmann: In the immediate situation, I didn’t think about it so much but when I was writing about it, I definitely felt a bit unsafe because I know that other colleagues had been charged and had to appear in court because they were writing about what the police did. And I was just a bit concerned about having no company lawyer to cover my back, in case someone would disagree with something in articles I wrote. That was my concern basically.

ECPMF: In your supernova article about the deportation you write this powerful finishing sentence: “ The police successfully carried out the deportation. At all costs.” What consequences do you think this has for press and media freedom, if the police act like this?

Böckmann: I mean especially when it comes to the last sentence. “At all costs.” It definitely means at all costs including violence. And looking at it from the perspective of a journalist, I definitely ask myself the question: should a state institution like the police be acting so violently towards someone who just wants to cover what’s happening? What else do they do?

Then looking at it from a perspective of what’s going on socially at the moment, especially on Eisenbahnstrasse and the surrounding streets.

[Also at the protest] There was a very diverse mix of people being there, showing that it is not okay to deport someone who is part of the community and so, it kind of was definitely painful to witness that they [the police] would just not give in even though there were hundreds of people saying that “this is not okay”.

[For instance], if you saw the pictures of what happened in Glasgow where the protestors stopped the police deporting two men. That really reminded me of the situation [in Hildegardstrasse]. Of course, it wasn’t in broad daylight and there weren’t as many people around. But the symbolic act and the basic premise were the same.

People stood up. Because they don’t think this is what you should do to a human being.

And that is pretty much what I mean “at all costs.” This situation was bigger than what happened and from my perspective, in German society, [reactions to deportation] are not being done correctly.

ECPMF: Last question, what do you think needs to change?

Böckmann: After 21st November, with the big demonstration in Leipzig, with the acts of violence against the press and the police not being able to either figure out who did what or to protect the press. Or not wanting to.  I think that was the situation when I think the police in Leipzig figured out that they have to change something. And since then, I think, they are trying to be more supportive towards the press when covering demonstrations and to offer more security. But that’s only towards the members of the press. And then, when you talk to your average police officer you don’t get the feeling that anything has changed.

And I know that many of my colleagues are crying out for it:

They definitely need people explaining to police officers what rights the free press has and how they affect police work and how police work should not and must not obstruct journalists’ work.