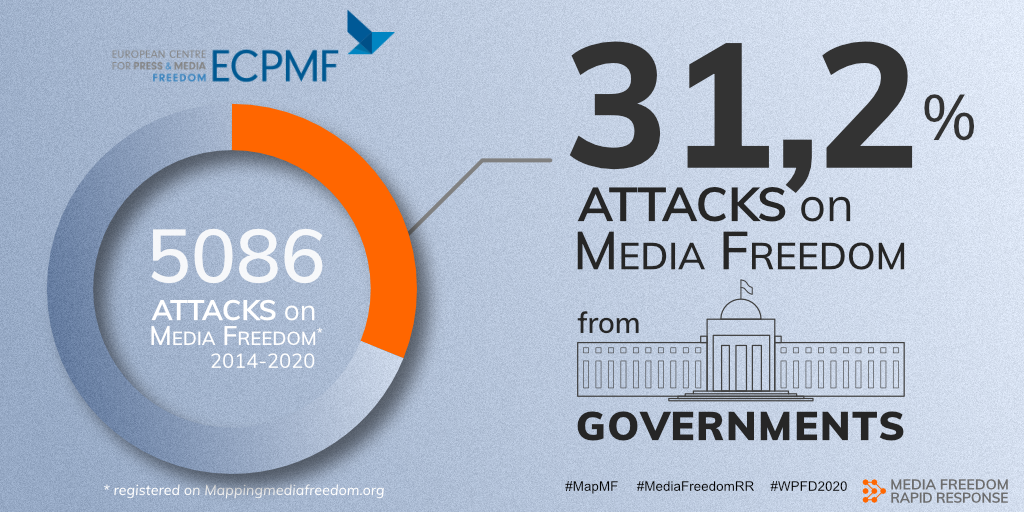 Europe: governments go from custodians to violators of media freedom

By Faith MiyandaziMay 3, 2020 No Comments

Is there much to celebrate this 2020 World Press Freedom Day?

It is the responsibility of governments to guard their citizens and ensure their rights and freedoms are protected. Governments are to provide and guarantee a space where press and media freedom can thrive. Instead, increasingly in Europe and around the world, the custodians have become the biggest violators of media freedom and the freedom of information in general. On this 2020 World Press Freedom Day (WPFD), we struggle to find much to celebrate about a freedom that is increasingly under fire from all sides, mostly from governments. Yet, the importance of journalism and the freedom to seek, receive and impart information has never been more critical as we wallow in a global pandemic that is the coronavirus.

The Mapping Media Freedom (MMF) platform, which records alerts on threats to journalists and media workers and violations of media freedom across Europe, has governments, state agencies or public official(s) as the main sources of violation. Of the 6,254 (122,97%) alerts recorded on the platform from 2014 to date, 1,587 /31,20% came from governments, state agencies or public officials.

The number of violations is increasing across Europe with more and more journalists being intimidated and silenced using a number of methods, from discreditation to being sued through strategic lawsuits against public participation (SLAPPs) to strategically silence them.

The 2020 Annual Report by the partner organisations of the Council of Europe Platform to Promote the Protection of Journalism and Safety of Journalists, of which the European Centre for Press and Media Freedom (ECPMF) is a member, recorded a total of 105 cases of journalists in jail in the Council of Europe member countries at the end of 2019. Of these, 91 cases were in Turkey alone. This is a clear example where the protector – the government -has gone rogue on its own citizens. It left the report to conclude that: “In 2019, Europe was an intense and often dangerous battleground for press freedom and freedom of expression.”

The current coronavirus pandemic has worsened the situation, with the numbers of violations increasing. In March and April 2020 alone, the MMF platform recorded 23 cases of press and media violations related to Covid-19. Meanwhile, the 2020 Press Freedom Index by Reporters without Borders (RSF) showed a worrying trend for Europe citing that “Europe’s journalists face growing dangers.”

As the press and media freedom community keeps up the pressure on governments, inter-governmental institutions and non-state actors to stop the attack on media freedom and the freedom of expression, it is ECPMF’s wish this 2020 World Press Freedom Day (WPFD) that governments safeguard the overall freedom of expression as it is, after all, their duty to do so. This way, we will all bask in the sun that is press freedom, enjoy the right to information that to all of us must be given, and celebrate those journalists and media workers that work hard to ensure we stay informed. And honour those journalists that have paid the heavy price for telling and uncovering the truth, with their lives. For it is for these reasons that World Press Freedom is marked.