Unpatriotic behaviour. Sedition. Being in the pay of shadowy external forces. Faking a neo-Nazi event. These are just a few of the charges that have recently been levelled against independent journalists by pro-government media outlets in several central and eastern European countries.

The opening volley in a sustained campaign of vilification directed at Serbia‘s independent media was fired by the state-owned weekly Ilustrovana Politika at the end of October, with an article that accused journalists who are critical of the government of being “traitors and collaborators with the enemies of Serbia”.

Two weeks later, Ilustrovana Politika followed up with another piece that accused the veteran journalist Ljiljana Smajlović – who has long been critical of the nationalistic legacy bequeathed on the country by its former leader Slobodan Milosević and co-founded the Commission Investigating the Murders of Journalists in Serbia – of complicity in the 1999 NATO bombing of Belgrade.

In mid-December, Ilustrovana Politika’s campaign of character assassination against Smajlović ratcheted up another level with a garish front page depicting her as a Madonna figure with two naked infants bearing the features of Veran Matić, the chairman of the commission, and US Ambassador to Serbia Kyle Scott.

Smajlović has no doubt over what lies behind this tidal wave of denigration, of which she has become the prime target. 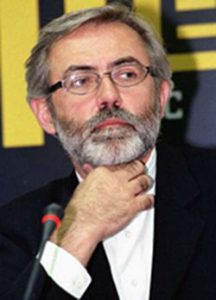 Editor Slavko Ćuruvija was murdered in 1999.

The long-running trial of four ex-members of the Serbian intelligence service accused of the murder of Dnevni Telegraf editor Slavko Ćuruvija – shot dead in April 1999 a few days after the pro-government Politika Ekspres accused him of welcoming the NATO bombardment – is now in its final stages, and Smajlović is convinced that the current campaign against her is designed to influence the judges in the case.

“The attacks come from the same Milosevic-era editors who also targeted my colleague Ćuruvija as a traitor prior to his assassination,” she told Mapping Media Freedom. “What is also sinister is that they are published and printed by the same state-owned media company that targeted Slavko nearly twenty years ago.”

“The clear implication is that I am the same kind of traitor as he was. How will that affect the judges? Will they fear this is not a good time to hold state security chiefs to account?” she added.

While Smajlović admits that Ilustrovana Politika’s denunciation has made her feel insecure, she insists she is less concerned for her own safety than worried about the consequences for the outcome of the Ćuruvija trial. Quoting Marx’s dictum that “History repeats itself, first as tragedy and then as farce”, Smajlović said. “I hope this is the farce part.”

In Serbia and other central and eastern European countries, the assignment of responsibility for historic causes of resentment and the potential of these to further divide a polarised public often form the background to attacks on independent journalists by their state-approved colleagues.

The thorny topic of Poland’s relations with Germany during the last century recently gave pro-government media in Poland a chance to accuse independent media of being insufficiently patriotic and even of falsifying facts. 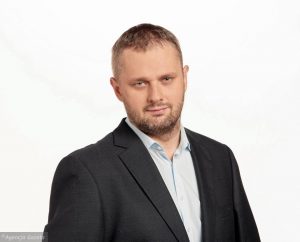 Journalist Bartosz Wieliński was targeted by the head of TVP Info’s news site.

In November, after Bartosz Wieliński, a journalist with the independent daily Gazeta Wyborcza, gave a critical account of a speech made by the Polish ambassador to Berlin at a conference devoted to the centenary of Poland’s independence, the head of the state broadcaster’s news website, TVP Info, accused him of lying and of putting the interests of Germany before those of his own country.

Only a few days before this attack, two media outlets that support Poland’s ruling national-conservative Law and Justice (PiS) party accused the independent US-owned channel TVN of fabricating the evidence on which a report about the resurgence of neo-Nazism in Poland was based.

Since it came to power in 2015, PiS – which has been accused by its critics of tolerating organisations that espouse far-right ideologies – has put pressure on independent media outlets, many of which are foreign-owned, as part of its campaign to “re-polonise” the media, and now appears to be using the public broadcaster and other tame outlets as accessories in this drive.

In Hungary, where the government led by Viktor Orbán has succeeded in imposing tight control on all but a few determinedly independent media outlets, a number of loyal publications are available for the purposes of vilification. 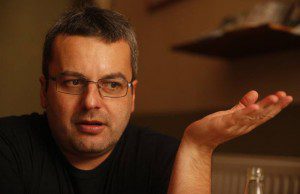 In September, a whole raft of pro-government media outlets vied with each other to depict Tamás Bodoky, the editor-in-chief of the investigative journalism platform Átlátszó and winner of the 2015 Index on Censorship Freedom of Expression Award for Journalism, as a “Soros hireling”. Bodoky became the target of a co-ordinated smear campaign after he posted on Facebook a picture of himself taken in Brussels with Dutch Green MEP Judith Sargentini, whose report on the Fidesz government’s infringement of core EU values had formed the basis for the European parliament’s censure motion against Hungary a few weeks earlier.

Another Hungarian journalist, András Dezső, who works for the independent news website Index.hu, also recently came under attack from pro-government media outlets after a Budapest court let him off with a reprimand over a case in which he was alleged to have made unauthorised use of personal information. In an article published before April’s general election, Dezső had cast doubt on the account of a woman who declared on Hungarian TV that she felt safer in Budapest than in Stockholm because of the lower level of immigration in Hungary. The airing of the interview by the public broadcaster was seen as providing support for Fidesz’s anti-immigration stance and aiding its election victory.

A criminal charge was issued against Dezső for “misuse of personal data”, and after he received what was described in the Hungarian media as “the mildest possible punishment”, two pro-government news websites, 888.hu and Origo.hu, accused him of deliberately propagating fake news and seeking to mislead his readers.

Why do they do it?

What motivates those journalists who smear their colleagues who seek to hold power to account?

There does not appear to be a simple answer to this question. While some may vilify fellow journalists to order purely for financial gain (or because of a desire for job security, government-sponsored media outlets generally being on a more secure financial footing than their independent counterparts), some appear to approach the task with at least a measure of conviction.

Ilcho Cvetanoski, who reports on Bosnia, Croatia, North Macedonia and Montenegro for Mapping Media Freedom and has observed many smear campaigns over the years, believes that financial and ideological motivating factors are often inextricably intertwined. He points out that two decades on from the armed conflicts in the region, Balkans societies are still deeply divided along ideological and ethnic lines, and many people still find it extremely difficult to accept the right of others to see things differently. Cvetanoski notes that there are many “true believers” who are genuinely convinced that they have a duty to defend their country from the “other” – a group in which they tend to lump critical journalists along with mercenaries, spies and traitors.

Lazara Marinković, who covers Serbia for Mapping Media Freedom, believes that the main motivation there is a need to be on the winning side and to please those in power. “Often they actually enjoy doing it, either for ideological reasons or because they feel more powerful when they are on the side of the ruling party,” she told Mapping Media Freedom. Marinković noted that the majority of Serbian tabloids and TV stations that conduct smear campaigns against independent journalists are owned by businessmen who have close links to President Aleksandar Vučić’s national conservative Serbian Progressive Party (SNS). Vučić began his political career during the Milosević era, when he served as Minister of Information.

In Poland, the divisions in society and the consequent lack of tolerance in political culture have been blamed for the increasing polarisation of the media. Michal Głowacki, a professor of media studies at Warsaw University, told Mapping Media Freedom that journalists take their cue from politicians in failing to show respect for fellow journalists associated with the “other side”. “They even use the same language as politicians,” Głowacki notes.

This is a view echoed by Hungarian journalist Anita Kőműves, a colleague of Bodoky’s at Átlátszó. Kőműves, however, insists that while journalists who work for independent media outlets strive to uphold the principles of journalistic ethics, the same cannot be said of those employed by pro-government outlets. “Some of those serving the government at propaganda outlets think that the two ‘sides’ of the Hungarian media are equally biased and that they are not acting any differently from their counterparts in the independent media sphere. However, this is not true: pro-government propaganda outlets do not adhere to even the basic rules of journalism,” she told Mapping Media Freedom.