Home » For the sake of the public’s right to know, journalists must be granted access

For the sake of the public’s right to know, journalists must be granted access 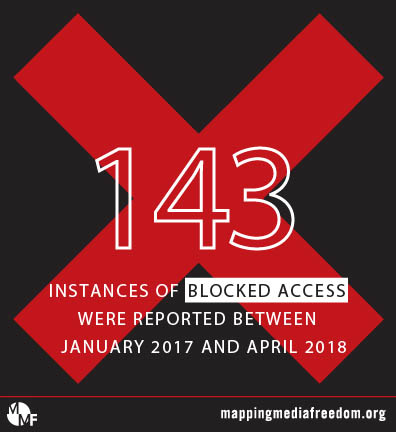 From the beginning of 2017 until April 2018, 143 reports of blocked access, in which journalists were expelled from a location or prevented from speaking to a source, were submitted to Index on Censorship’s Mapping Media Freedom project. Out of the 25 countries in which such violations have occurred, the five worst were: Ukraine, Russia, Belarus, Turkey and France.

“Mapping Media Freedom has highlighted is a continual prevention of journalists from doing their job by way of blocked access,” Joy Hyvarinen, head of advocacy at Index on Censorship, said. “For the sake of the public’s right to know, journalists must be granted access in order to eliminate the problem of important issues going underreported.”

With 20 separate incidents of blocked access, Ukraine tops the list. Thirteen of the reports involved Russian or Georgian media outlets, highlighting the tension between the three countries, with November 2017 being the busiest month, with five violations recorded. At least 12 journalists were barred from entering the country in the last 15 months, with another six being deported. Among those deported was Georgian television channel Rustavi-2 journalist Tamaz Shashvishvili, who was forcibly detained in November 2017 by around 15 armed members of Ukraine’s security services who stormed his apartment, hit him in the face with a pistol and blindfolded him.

In another case, two Spanish journalists were deported to the Netherlands in August 2017 and banned from entering the country for three years after being detained for about 20 hours at Kyiv International Airport. They say they were treated like “criminals” and blacklisted from the country until 2020. A spokeswoman for the Ukrainian secret service said that the journalists were barred because of their “activities that contradict the national interest of Ukraine”.

In Russia, journalists were denied access on 18 occasions, including 10 times from courtrooms and state assemblies. In March 2018, while live reporting from the Dzerzhinsky District Court of St. Petersburg, Sasha Bogino, a correspondent for the online news site Mediadzona, and her colleague photographer David Frenkel were dragged from the hall. In January 2018, journalists were barred from former Kirov governor Nikita Belykh’s court hearing for bribery.

In January 2018, investigative website Russiangate was closed down three hours after publishing an article claiming to have traced expensive properties to director of Russian secret service FSB Aleksandr Bortnikov, following a request of the General Prosecutor’s Office. Editor-in-chief Aleksandrina Elagina was subsequently dismissed from her position, with investors pulling funding for the site causing it to close.

In Belarus eight cases, usually with inadequate explanation, were reported. Pavel Dailid, a journalist for the website Pershy Regiyon, was barred from reporting at a local council meeting in December 2017, when deputy chairman of the Ivatsevichi district Ideology department Aliaksandr Velikaselets demanded to see “an accreditation by the local government” despite the council meeting being as open to the public. In another case, a correspondent for the independent newspaper Hazeta Slonimskaya was barred from local meeting in May 2017 by a government official who stood in front of the entrance calling the paper biased. The journalist was invited to the meeting by local residents.

Photojournalists have also been targeted. In July 2017 city authorities in Babruisk banned photography and filming during Belarus’ Independence Day. Journalists for the newspaper Bobruiski Courier and others, therefore, had no opportunity to photograph the festivities during the public holiday. Two months later a journalist was denied accreditation by the Foreign Ministry for the eighth time. The ministry noted that Victar Parfionenka’s accreditation had been rejected because he “had carried out journalistic activities on behalf of a foreign media outlet without accreditation of the Ministry of Foreign Affairs in Belarus”.

In the seven out of nine reports from Turkey, access to a number of websites and TV stations was denied. Sendika, a left-wing labour-oriented news website, has been blocked 23 times in all. In January 2018 access to five news websites was banned, including feminist and pro-Kurdish news website jinnews.org, over a report on the murder of three Kurdish women in Paris in January 2013. Access to daily-German newspaper BILD was blocked online in February 2017 after its harsh criticism of the arrest of German-Turkish reporter Deniz Yucel, a correspondent for daily newspaper Die Welt. Kurdish-language newspaper Rojava Medya was also blocked online in May 2017, most likely for its position as the informal successor of Azadiya Welat, which was shut down under State of Emergency rules introduced after the coup attempt on 15 July.

Eight reports of blocked access were reported in France. With a presidential election underway in 2017, five of these involved journalists being denied access to candidates, usually by force.

In April 2017, two Buzzfeed News journalists, David Perrotin and Paul Aveline, were physically prevented from filming a meeting with Francois Fillon. The journalists were filming two people who had interrupted a meeting with Filion when security personnel grabbed the men, threatened them and demanded they delete their footage. It was only when the journalists threatened to write an article about the incident that security backed off.

A similar incident occurred in February 2017 when three journalists were violently expelled from a conference with Marine Le Pen, president of the National Front. Working for the daily current affairs show Quotidien, the journalists were violently kicked out of a conference after attempting to ask Le Pen a question about claims she had misused European Parliament funds to pay her bodyguards. Before journalist Paul Larrouturou could finish his question, he was grabbed, ejected by security and was prevented, along with his two colleagues, to regain access, despite his official accreditation.