Novosti weekly is a Serbian-language magazine in Croatia. It is run by journalists who are both Serbs and Croats, and are some of the most highly esteemed reporters in the country.

Although the weekly is fully funded as a Serb minority publication by the Serbian National Council, the paper deals with a whole range topics, not only those directly related to the minority status of Croatian Serbs, but also covering all the political, economic, social and cultural issues that are important for the Croatian society as a whole.

The paper’s journalists have come under intense pressure in the last year from Croatian nationalists with attacks and death threats that have been sanctioned by ultra-conservative forces in the country.

“As journalists we realise that our professional duty is to write truth, but because of the conditions in which we work, a significant part of our business has become the defence of the right to freedom of expression, without which truth is not possible,” said Novosti Weekly.

This is against a backdrop of a nationalist coalition government led by the conservative Croatian Democratic Union (HDZ), which oversaw the sacking or demotion of 70 public broadcast  journalists in the months after it came to power in January 2016.

Novosti irritates nationalists by writing about the things Croatian society is often silent on, for instance, the war crimes committed by the Croatian side during the Balkans war in the 1990s and the role of Croatian forces in the war in Bosnia and Herzegovina.  It often uses satirical front covers to make its point.

The weekly also stands up for minorities, including LGBT groups, against the conservative forces of the Catholic Church and war veterans. One of their journalistic campaigns has been to challenge attempts by the far right to rehabilitate the Ustaše, the  fascists who were in power in Croatia during World War II.

Novosti prides itself also on classic investigative journalism, which uncovers political and corporate corruption; and they do not shy away from exposing the pressure on editors and journalists from both censorship and self-censorship. 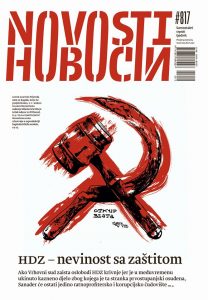 2017 was a year which saw the further rise in Croatia of right-wing extremism and ultra-conservative tendencies.  Novosti weekly has been at the forefront of fighting the nationalist purges, becoming a forum for voices of resistance.

At the beginning of December 2016, Novosti broke a story about plans by the government, and veterans associations to install a memorial plaque with the World War II fascist slogan Za dom spremni (Ready for the Homeland) near the site of the former ustaše concentration camp at Jasenovac where more than 83,000 Serbs, Roma and Jews died.

Immediately after the release of the story in Novosti, the far-right political party A-HSP organised a protest under the windows of the magazine’s offices shouting, fascist slogans and anti-Serbian insults.

Some war veterans’ societies filed criminal charges against journalists, and others launched a series of private lawsuits against the publisher of the Novosti.

In August 2017, the extreme right piled on the pressure, accusing Croatian Serbs of setting the fires which burnt down forests in large parts of the Croatian coast during the summer.

They claimed Novosti Weekly had been encouraging the arsonists and Novosti received threats of violence – to shoot journalists and bomb the offices. The editorial team was told they would end up killed like  Charlie Hebdo journalists.

“We would like to thank you for recognizing our work as well as for putting Novosti Weekly into the international spotlight after reaching the shortlist of the Freedom of Expression Awards,” said Novosti Weekly. “Your recognition means as much as the reactions of all relevant international journalistic organizations that stood in Weekly Novosti’s defense after facing pressure and threats for the work that we do. It’s a strong message of support that speaks volumes not only for all those who burnt out paper, but also to those who tried to ensure our destruction.”

See the full shortlist for Index on Censorship’s Freedom of Expression Awards 2018 here.