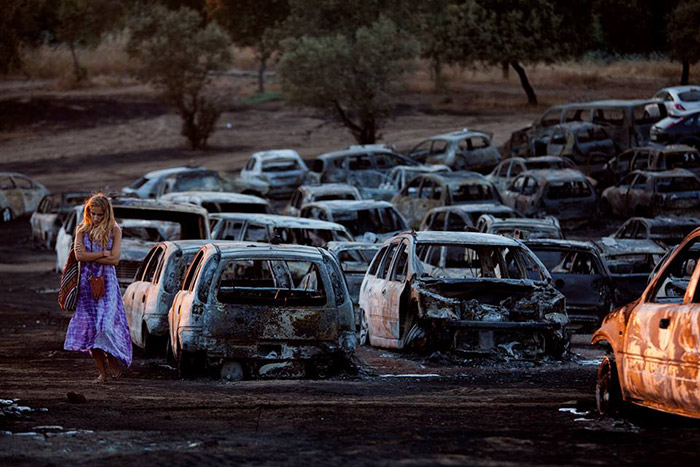 The photo that won Enric Vives-Rubio the 2017 Gazeta Award, one of the most prestigious awards in Portuguese journalism.Despite having worked in Portugal’s small media industry for the past two decades, photojournalists Enric Vives-Rubio and Nuno Fox have never worked in the same newsroom. However, their careers share certain similarities, including poor working conditions, job loss and a reluctant turn of their backs to the profession.

Vives-Rubio got a job at the Portuguese daily Público in November 2005. “It was just the kind of newspaper I hoped I’d work for one day,” he told Mapping Media Freedom.

However, the conditions offered didn’t match Vives-Rubio’s hopes. Instead of proposing to hire him on a regular contract like most of its workers, Público offered to pay him through a “recibo verde”. These “green receipts” are a way for independent or freelance workers to charge companies for their services on an occasional basis, but the system is often abused by Portuguese companies to hire de facto full-time workers without offering them job security or the benefits that come with a full-time contract.

Employers get all the advantages of full-time staff — no obligation to grant job benefits and the possibility to lay off employees with no justification or severance pay due — while the worker is left with no job security and pays nearly twice as much tax as someone on a regular contract.

The offer made to Vives-Rubio by Público was hard to resist. “The offer was bad, but I couldn’t say no otherwise I’d be unemployed,” he explained. He was told when he was hired that the green receipt situation was “temporary” and that two months later — come the end of the financial year in 2006 — he would get a proper contract.

“Things didn’t turn out quite like that after all,” Vives-Rubio said.

During the first two years, he’d ask his superiors about his situation on a monthly basis. His insistence got him a contract — although not the one he was looking for — in which he would still work under the green receipt system on an annual basis. This, however, did not grant him any job benefits or job security beyond 365 days.

While all of his colleagues had a €3,000 annual stipend to spend on working material, Vives-Rubio had to pay for his own camera and lenses. He also missed out on food allowance, health insurance, sick days, parental leave and the additional two pay packets per year that full-time workers are entitled to by law.

“They weren’t there to negotiate and were just looking for a way to get rid of a problem,” Vives-Rubio said. Leaving the room without a deal in hand, he resolved to work until the end of his contracted year on 23 July. During this time he was given less assignments while his colleagues were given more. Then, in June, his entrance card stopped working. Público had told a contracted worker who had been going in and out of the building for 12 years that he was barred from entering.

Since he was laid off, Vives-Rubio has received the Gazeta award, one of the most prestigious in Portuguese journalism. However, he doesn’t see a future a future for him in the media industry anymore. “Photojournalists are all slowly being laid off, so why knock on doors?” he asks. “I’ll keep on making journalism, but it will be for myself. As a photographer, I’ll have to reinvent myself.”

The experience of photojournalist Nuno Fox is similar to that of Vives-Rubio. Ever since he started his career in 2004, he has never had a full-time contract. He started his career at the daily Diário de Notícias before moving to the weekly Expresso, all under the green receipt regime.

“I was hired after there was a layoff in the newspaper and they needed to fill in some positions,” said Fox. He was given a €1,500 monthly salary. “This figure was verbally agreed; there’s no paper trail,” Fox said. “I was a part of the newsroom in every way except I wasn’t properly contracted.”

Fox also used his own camera and lenses too. In one of his last assignments for Expresso, he covered the funeral of Portuguese football legend Eusébio. “It was raining heavily but I had to do my work anyway,” he says. As a result, two of his lenses were damaged. “I thought the newspaper would pay for the damage but they told me it was none of their business. I had to pay €900 to fix one of them and I gave up on the other one because it would have cost me more than €1000 to repair it.”

In 2014, the Impresa media group, to which Expresso belongs, decided to create a pool of photojournalists that would work across all of its titles. Fox wasn’t included and was told his services were no longer needed. “I had no protection against this, so it was an easy choice for them,” he says.

The day after he was laid off, Fox wrote down a list of all publications he was interested in working for, picked up the phone and called their photo editors. “I knew things weren’t easy in journalism, so I decided to go beyond those phone calls,” he says. He also made calls to find work as a commercial photographer. “It was never my intention to go that way, I really believed in journalism, but I was left with no option.”

Three years on, most of Fox’s income now comes through commercial photography. At first, he felt uneasy about turning his back on photojournalism, but is now at peace with this reality. “It’s not that I lost my passion for the job, but I don’t identify with the mindset that values quantity over quality that brought us here.”

Rodrigues underlines that “photojournalists are the most affected by job instability” amongst Portuguese media workers. Those who work with images rather than words deemed less crucial for journalism. “In the eyes of many in newsrooms, photojournalists are looked down on as mere technicians.”

Photojournalists are among the “most versatile” elements in newsrooms and, with increasing pressures, aren’t given enough time to do their jobs properly, Rodrigues says. “When photojournalists are treated like this, the pride they take in their work vanishes and they lose their motivation.”