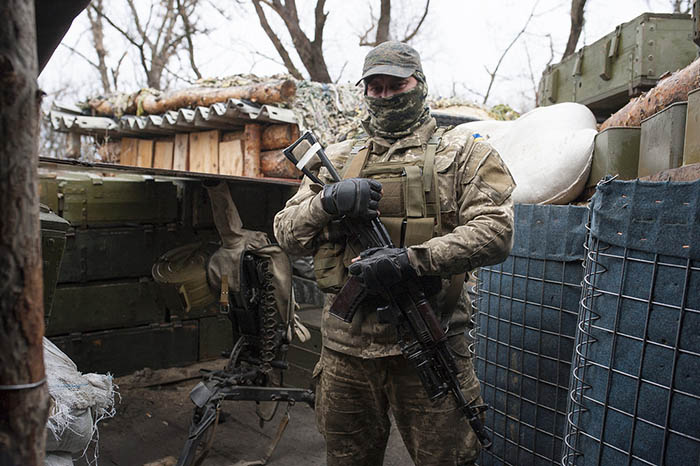 Soon after the annexation of Crimea by the Russian Federation, full-scale fighting began between Ukrainian troops and separatists supported by Russia in the east of Ukraine. During active fighting in 2014, it was relatively easy for journalists to access to territories controlled by separatists.

“Accreditation was given quickly and without delay,” a Ukrainian producer who worked with international TV channels said. The producer, who requested anonymity because of ongoing work in the area, admits the risk for journalists was high because of the chaotic situation on the frontline and many of them faced detention by separatist militants. “I, like many, was detained and placed in a basement, but, fortunately, it only lasted for several hours,” he added.

Anna Nemtsova, a correspondent for Newsweek magazine and The Daily Beast, told Mapping Media Freedom that in 2014 she was abducted twice – firstly in the Luhansk region and secondly in the city of Donetsk.

“These were classic abductions,” Nemtsova said. “In Luhansk region, near Krasny Luch, armed militia wearing masks took our cell phones away from us and drove us in an unknown direction. In Donetsk, it happened near the morgue, where, according to our information, the militia had brought some of the bodies of passengers of the downed Boeing MH-17. Both detentions lasted for a few hours.”

Soon the situation with journalists’ access to uncontrolled territories would change for the worse. In February 2015, the Minsk agreements were signed and a ceasefire was established. The ceasefire agreement prompted the authorities of the two self-proclaimed republics to start monitoring journalists’ reports from the Donetsk People’s Republic and Luhansk People’s Republic.

“If they did not like the angle of coverage or some term, for example ‘separatist republics’, the name of a journalist was immediately added to the list of undesirable persons. The press service began to summon such journalists to ‘talks’ to express their dissatisfaction,” source who works as a local TV producer told MMF.

Nemtsova also faced similar difficulties. In summer 2015 she was told that the DPR press service did not like her reports and threatened to ban her, which later they said they did. “Their complaints were unreasonable, they were not about any errors in my report, but about the term ‘separatists’, which they claimed I used in my stories,” she said.

Thus, the monitoring of publications about the separatist zone in the media has led to the fact that from the summer of 2015 many journalists who tried to obtain accreditation from the self-proclaimed authorities began to receive refusals. Some reporters who managed to enter the territory of the self-proclaimed republics were detained and deported. On 16 June 2015, separatists from DPR captured Novaya Gazeta special correspondent Pavel Kanygin and handed him over to Russian security services (FSB). According to the journalist, they checked his documents and released him “in the middle of a field.”

Over the past year, arbitrary refusals to enter the territory of the self-proclaimed republics have been quite frequent. In December 2016, Deutsche Welle’s correspondent Christian Trippe and his crew were barred from entering the territory of the self-proclaimed DPR. Journalists were trying to get to the territory controlled by DPR at a checkpoint near Marinka. Journalists had to wait an hour in a neutral zone between two fronts, while they were not allowed to return to the territory controlled by Ukrainian forces. The crew had received an authorisation from DPR press centre and had scheduled an interview with a spokesperson for the separatists. The journalists planned to visit Donetsk with Principal Deputy Chief Monitor Alexander Hug of the OSCE Special Monitoring Mission to Ukraine. However, the militants did not let them through the checkpoint with the OSCE, citing the decision of DPR special services.

In 2016, the self-proclaimed authorities continued the practice of detentions and expulsions of journalists. In November, special forces of the self-proclaimed Donetsk People’s Republic detained and expelled two journalists working for Russian TV channel Dozhd. Correspondents Sergei Polonsky and Vasiliy Yerzhenkov were detained by intelligence agencies on the evening of 25 November in Donetsk. Polonsky said that members of the self-proclaimed Ministry of State Security went to their apartment and took them to the main building of the ministry where they were interrogated. “Three employees of the Ministry of State Security were involved in the interrogation. They watched videos and deleted them. They also blocked Polonsky’s phone, broke Yerzhenkov’s phone and destroyed his notebook,” Dozhd reported. According to Dozhd, the journalists were not physically abused. “We experienced psychological abuse, but nothing more,” Polonsky said. Later, employees of the Ministry of State Security explained to the correspondents that their detention was a consequence of “false information” in the accreditation, which turned out to be a wrong phone number.

The Dozhd crew were accredited to work in Donetsk by the Security Service of Ukraine and by the Ministry of information of DPR. Journalists entered the DPR border on 24 November from Russia to interview Alexey Khodakovsky, former secretary of DPR’s Security Council. Previously, the self-proclaimed Ministry of State Security of DPR said the cause of the journalists’ expulsion was “biased” and “provocative” coverage of the situation in the DPR.

Local journalists and bloggers often find it even more risky to work in the separatist territories. In 2014, many journalists were forced to leave the territory, and are now working elsewhere in Ukraine. Over the past year, a number of arrests by separatists have been reported. The latest one is an incident with blogger and writer Stanyslav Aseev who disappeared in Donetsk. The blogger was reportedly detained by militants of the self-proclaimed DPR. Aseev uses the alias Stanislav Vasin and contributes to a number of news outlets including Radio Liberty Donbass Realities project, Ukrayinska Pravda, Ukrainian week and Dzerkalo Tyzhnya. He also runs a prominent blog via Facebook.

Donbass Realities project editor-in-chief Tetyana Jakubowicz said their contact with Aseev was lost on 2 June. That day, Aseev filed the latest report from territories held by separatists for Radio Liberty. Aseev’s relatives and friends confirmed that they also lost contact with the blogger. They questioned the self-proclaimed Ministry of Public Security of the DPR, but didn’t receive any answers. The journalist’s mother found evidence that his flat was broken into in Donetsk and noticed that some of his belongings were missing, including a laptop. On 12 July, Amnesty International reported that it learned that Aseev was being held by the de-facto “ministry of state security”.

Recently, several bloggers have been arrested in the self-proclaimed LPR. In October 2016 Vladislav Ovcharenko, a 19-year old blogger, who runs the Twitter account Luhansk Junta, was detained by separatists. Later, armed representatives of the self-proclaimed Ministry of the State Security raided his parents’ apartment, taking his mother’s computer. In December 2016, Facebook blogger Gennadiy Benytskiy was arrested in Luhansk. The blogger, who is known for his pro-Ukraine views, was accused of distributing of “extremist materials” online.

Journalists take risks even when they get accreditation from the separatist authorities. A leak by the website Myrotvorets in May 2016 led to the personal data of more than 5,000 journalists becoming available online. The link to the leak was published by some Ukrainian politicians, calling journalists who received accreditation “traitors.” Some of the journalists then received threats.