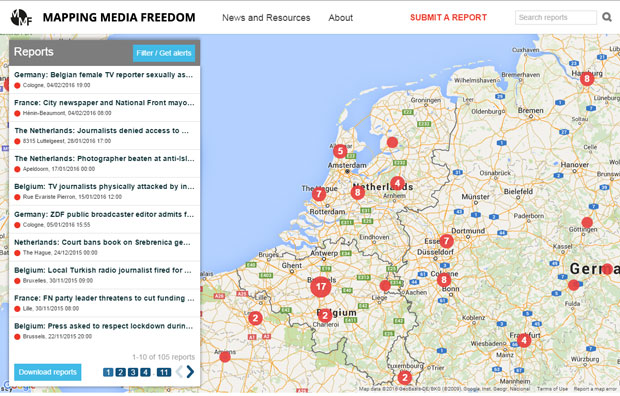 Dutch journalists have been ringing alarm bells about violations of media freedom at public asylum debates throughout the country. Several journalists and broadcasters claim they have been banned from debate evenings in small towns across the country by local authorities. In one instance, a village municipality placed a five-kilometer-wide exclusion zone around the area where the debate took place.

On 28 January 2016, Allard Berends, editor-in-chief of regional broadcaster Omroep Flevoland, received a call from one of his reporters. A citizens’ debate about the possible housing of refugees in the village of Luttelgeest, in the centre of the country, was about to start.

But there was a problem.

“We already knew that journalists were not welcome inside,” Berends told Index on Censorship. “So my reporter was standing outside, on the public ground.” But while conducting street interviews, his reporter and cameraman were approached by two police officers. They told to leave the village because an emergency decree recalled Berends, who’s in charge of the leading radio and TV broadcaster in the province of Flevoland.

“I have a long career in journalism,” he said. “But I’ve never experienced something like this before. It was just ridiculous. It was Kafkaesque.”

According to documentation brought to the journalists by the police officers, the emergency decree was declared by Luttelgeest’s mayor and stated that only people who were invited were allowed inside. Nobody else — including journalists — was allowed to get closer than five kilometres around the area where the citizens debate was held.

The municipality of Luttelgeest had told Omroep Flevoland that an emergency decree was in place to prevent possible turmoil and to give citizens the privacy to say what they want. “This is an unacceptable explanation,” Berends explained. “It crosses the borders of press freedom and should not be possible in this country.”

While Europe is coping with the largest migration crisis since the Second World War, the arrival of thousands of refugees has caused tension in the Netherlands, as it has in other European countries.

The Netherlands made international headlines with a series of incidents. In October 2015, hooligans attacked an asylum centre near the city of Utrecht, where the majority of refugees housed there were Syrian. In December, a meeting of the council in the town of Geldermalsen to decide on the building of a centre to house 1,500 asylum seekers descended into riots. The police fired warning shots, with live ammunition, to disperse a crowd of opponents, chanting anti-migrant slogans. In several other towns and villages, violent protests broke out against plans to build housing for asylum seekers.

Local governments across The Netherlands have had difficulties trying to sell the moral case for housing asylum seekers to a sceptical and often angry electorate. In a bid to include local people in the debate, citizen debate evenings have become a regular fixture in recent months. But on several occasions they have been marred by confrontation and violence, often in front of watching TV cameras.

The incident in Luttelgeest is not an isolated case. In Geldermalsen, journalists were restricted from covering the citizen debates, too. A radio reporter for the national broadcaster NOS tweeted that he was denied entrance to the public debate at the Geldermalsen town hall. According to the report, a security guard had been instructed to “keep the NOS away from the area.” And a municipality spokesperson had reportedly told the journalist the “press doesn’t interest us at all” and “if you want to follow the debate, that is your problem, not mine”.

In the city of Harderwijk journalists were not allowed to record audio or video at a public meeting concerning housing for 800 asylum seekers in the town. Those who refused to comply with the order, it was reported, were told that they would be removed from the venue.

At a similar meeting in the southern town of Heesch, most journalists were simply denied entry. The municipality’s media department had made a strict selection, only allowing a few journalists in.

Similar cases have been reported in the cities of Kaatsheuvel and Utrecht.

The Dutch Association of Editor In Chiefs (Het Nederlands Genootschap van Hoofdredacteuren) have published a statement expressing their concern about the restrictive media policies now being adopted by local governments.

“In an open and democratic society, it is up to the media to decide what to report on, how to report and what methods to use,” they wrote in a statement. “We acknowledge tensions surrounding the refugee debate in the Netherlands. But these tensions exist within the debate itself and in all the interests and emotions involved, not in the reporting of it. Restricting the media should never be the answer.”

The Dutch Union of Journalists (NVJ) agrees. “It is just wrong to differentiate between visual, audiovisual and written media at meetings in which the public is being informed by local governments,” NVJ spokesman Thomas Bruning told Index on Censorship.

The incident in Luttelgeest, in which journalists were not only banned from a public debate but also denied access to an entire village, is considered particularly alarming by the NVJ.

“The press was not even allowed to talk to citizens and politicians before and after the debate,” Bruning said. “Using an emergency decree is really not worthy of a democratic constitutional state.”

The NVJ has sent letters of complaint to all the municipalities involved.

The Omroep Flevoland editor-in-chief Berends announced that he will go to court and press charges against the mayor of Luttelgeest, who was responsible for issuing the emergency decree.

“I want to ask a judge what he thinks of a mayor who declares an entire village a no-go area for journalists,” said Berends. The NVJ is supporting Omroep Flevoland in court.

On that January evening, Omroep Flevoland was not able to report from the debate about a possible centre for asylum seekers in Luttelgeest.

“We were able to speak to some citizens and council members the day after,” Berends said.

The debate passed off calmly. “But really, we should have been there,” added Berends. “It is the essence of our profession, we observe and report what we have heard and seen.”

This article was originally published at Index on Censorship.