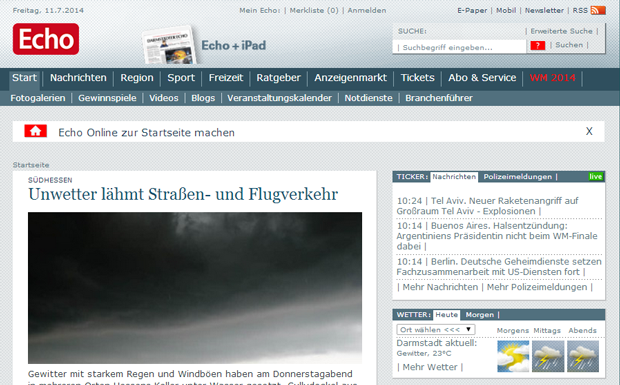 A local newspaper in the western German city of Darmstadt is at the centre of a legal case that will measure whether readers’ comments are protected by Germany’s press freedom laws.

On June 24, police and the Darmstadt public prosecutor arrived with a search warrant at the offices of the newspaper Echo. A complaint had been filed over a 2013 reader comment on Echo’s website. Months later, a local court issued a search warrant to force the newspaper to hand over the commenter’s user data.

The comment, which was left under the username “Tinker” on an article about construction work in a town near Darmstadt, questioned the intelligence of two public officials there. Within hours, Echo had removed the comment from its website after finding that it did not comply with its policy for reader comments. According to a statement Echo released after the June confrontation with police, the two town administrators named in the comment had filed the complaint, alleging that it was insulting. This January, Darmstadt police sent the newspaper a written request for the commenter’s user data. Echo declined.

When police showed up at Echo’s offices five months after their initial request for the commenter’s identity, the newspaper’s publisher gave them the user data, preventing a search of Echo’s offices. A representative for the Darmstadt public prosecutor later defended the warrant.

“It’s our opinion that the comment does not fall under press freedom because we assume that the editorial staff doesn’t edit the comments,” Noah Krüger, a representative for the Darmstadt public prosecutor, told Echo.

According to Hannes Fischer, a spokesperson for Echo, the newspaper is preparing legal action against the search warrant.

“We see this as a clear intervention in press freedom,” Fischer said. “Comments are part of editorial content because we use them for reporting – to see what people are saying. So we see every comment on our website as clearly part of our editorial content, and they therefore are to be protected as sources.”

In early 2013, a search warrant was used against the southern German newspaper Die Augsburger Allgemeine to retrieve user data for a commenter on the newspaper’s website. In that case, a local public official had also filed a complaint over a comment he found insulting. The newspaper appealed the case and an Augsburg court ruled that the search warrant was illegal. The court rejected the official’s complaint that the comment was insulting, but also ruled against Die Augsburger Allgemeine’s claim that user comments are protected under press freedom laws.

In Echo’s case, the commenter’s freedom of speech will likely be considered in determining whether the comment was insulting. If convicted of insult, the commenter could face a fine or prison sentence of up to one year. Given the precedent from the 2013 case and the public prosecutor’s response, it’s unclear whether press freedom laws may be considered against the search warrant. Ulrich Janßen, president of the German Journalists’ Union (dju), agreed that user comments should be protected by press freedom laws. “If the editors removed the comment, then that’s a form of editing. That speaks against the argument that comments are not editorial content,” Janßen said. Warning that the search warrant against Echo may lead to intimidation of media, Janßen cautioned, “Self-censorship could result when state authorities don’t respect press freedom of editorial content.”

Recent reports from Germany via mediafreedom.ushahidi.com:

New publisher of tabloid to lay off three quarters of employees

Transparency platform wins court case against Ministry of the Interior

This article was posted on July 11, 2014 at indexoncensorship.org