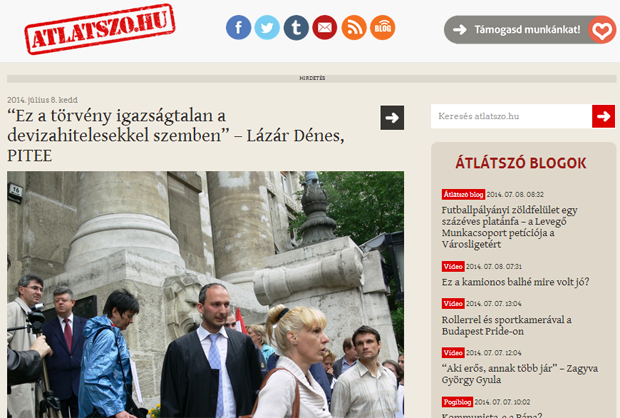 Hungarian NGOs are facing a rough summer: The Government Control Office (KEHI) has launched a series of investigations into grants they received from the Norway Financial Mechanism. Now the Council of Europe’s Commissioner for Human Rights, Nils Muižnieks, has written to János Lázár, Minister of the Prime Minister’s Office to express concern over the situation.

In the letter, Muižnieks told Lázár that he had been informed by several parties that audits were being conducted over the grants. A forthcoming report will further detail the monitoring that Muižnieks was conducting around media freedom in the country. For his part, Lázár has responded to the letter from the COE commissioner.

As Index reported on July 8, the government controls come after a long smear campaign with members of the Fidesz government accusing these NGOs to be proxies for “foreign interests”, and that Norway is using the program to exert direct political influence on Hungary.

“There is panic and uncertainty in the Hungarian civil society. In this respect, the controls are very effective, even if there will be no consequences,” says Tamas Bodoky, editor-in-chief of Atlatszo.hu, an investigative journalism outlet also targeted by the KEHI audit.

Atlatszo.hu decided not to comply with the government inspection, regarding it as unlawful. They say that KEHI is an agency overseeing government financial matters, and does not have the authority to investigate financing for NGOs. However, they have nothing to hide, so they published all relevant records concerning the use of funds on the website of their partner organisation, Asimov Foundation.

A number of NGOs followed Atlatszo’s example, but it is unclear what the repercussions of this decision might be. According to Bodoky, KEHI could freeze their bank accounts, suspend their VAT number, and fine them as well.

It is difficult to portray these NGOs as strongly opposing the Fidesz rule. Some of the organisations receiving grants from the Norway Financial Mechanism have been involved in anti-government protests, but others have fruitful cooperation with the government. The vast majority of grant recipients have no political involvement at all.

Bodoky believes the government controls are a small-time retaliation for the decision of the Norwegian government to suspend the payments from the EEA and Norway Grants. This fund represents the financial contribution of Norway, Iceland and Liechtenstein towards reducing economic and social disparities in the European Economic Area (EEA).

Hungary was set to receive 20 billion euros in the 2014-2020 period from this fund. However, the Hungarian government recently made important changes to the system by which EU and Norway development grants are administered. They did not consult with the donors. As a result the Norwegian government suspended the payments.

This measure did not affect the considerably smaller NGO Fund, operated by a Hungarian consortium of NGOs. The overall objective of this fund is to “strengthen civil society development and enhance contribution to social justice, democracy and sustainable development”.

Some members of the NGOs administering the fund appear to have links to Politics Can Be Different (LMP), a small liberal party. Apparently this was the reason why State Secretary Janos Lazar, the “strong man” of the Fidesz government decided to write an open letter to the official representative of the Fund’s donors, Vidar Helgesen, Norway’s Minister of EEA and EU Affairs, accusing the Norway government of intervention into the internal affairs of Hungary.

Hungary: Investigative journalism group says it will not comply with government audit

This article was posted on July 8, 2014 at indexoncensorship.org