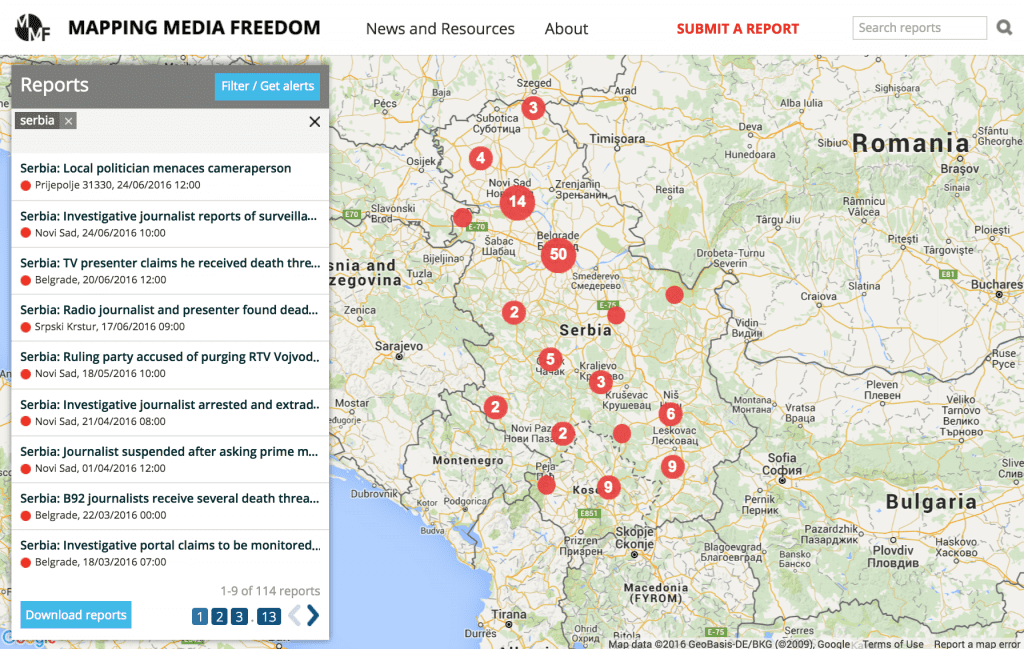 Journalists and citizens in Serbia’s northern city of Novi Sad are taking the streets after a wave of dismissals at the regional broadcaster Radio Television Vojvodina, which they believe is a direct result of political pressure.

It was late in the afternoon on 17 May when journalist Vanja Djuric heard that her job was no longer necessary. “We had just prepared the news items for the next day,” she told Index on Censorship. “They just told us, ‘You don’t have to come to work tomorrow’.”

She was not the only one. By the end of that week, 18 RTV employers had been replaced without explanation. Some received a phone call, others were stopped in the building’s hallway. “The whole newsroom, all the editors and journalists, we’d all been sent home,” Djuric added.

Novi Sad, Serbia’s second city, has been the centre of protests for media freedom ever since. Thousands have taken the streets to demonstrate against editorial reforms at one of the biggest public broadcaster in the country. Protesters believe that the ruling party of Prime Minister Aleksandar Vucic is gradually taking control over the radio and tv station that used to be one of the few independent broadcasting media companies in Serbia.

It is believed that the dismissals of RTV editorial staff was a direct result of a shift in government in the autonomous province of Vojvodina.

Elections had taken place on 24 April and the results, which caused a dramatic shift in power when the results were revealed on 4 May. The Serbian Progressive Party had won a majority like it already had on a national level.

The national equivalent of RTV, Radio Television Serbia, is already under strict government control, and major concerns have been raised that RTV is now headed into the same direction.

Over 100 journalists and editors have signed an open letter criticising the dismissals and asking the new board of directors to resign and to restore free media at RTV. A newly formed protest movement called Podrzi RTV (Support RTV) has organised four protests so far.

Vojvodina’s journalist association, the Independent Journalist Association of Vojvodina, believes that the new political leaders were intended to take over the public broadcaster. “The political takeover of one of the most objective televisions in Serbia started immediately after the elections with the non-transparent replacement of RTV’s programme director,” Nedim Sejdinovic, president of the Independent Journalist Association of Vojvodina told Index on Censorship.

“Soon after that the general director and the director of one of the most popular news programmes resigned,” he said. “It was the start of the new leadership.”

Most journalists were taken off their editorial positions and transferred to non-journalistic jobs within RTV. The programme schedule changed overnight. “Under the excuse of ‘summer shifts’, they took down almost every political and investigative programme,” Sejdinovic said.

While the majority of the journalists are still on the payroll, five prominent journalists so far have been fired.

NDNV is expecting more journalists to lose their jobs in the coming months. The association is looking into the dismissals with a team of lawyers. “We found out that most dismissals were against the law so we are preparing court cases up to the European Court for Human Rights,” said Sejdinovic. Serbia’s national journalist associations NUNS and UNS, as well as the OSCE have strongly condemned the developments at RTV.

Journalist Sanja Kljajic was working on RTV’s recently launched investigative journalism programme, which was also cancelled by the new management. She is one of the initiators of the protest movement Podrzi RTV.

“We’ve been accused that we were not objective and didn’t fulfil our role as a public service, with no evidence or arguments,” she told Index on Censorship. Her show was called Behind the Wall, the first season was about to start, dealing with the country’s problems within the judicial system. “Bearing in mind that we were doing research about terrible results of the judicial reforms over the past 15 years in Serbia, we are sure that the reason for cancelling the project is a textbook example of censorship,” said Kljajic.

RTV had a unique reputation in Serbia, where the media has become more and more unfree in the recent years. It had managed to operate objectively and has been praised for being one of the few broadcasters in the country that managed to resist political pressure. While other public media have turned into a mouthpiece for the prime minister, RTV kept broadcasting debates and critical reports. Sanja Kljajic was proud to be a part of it. “I was free to ask any question to anyone,” she said.

That started to change already in the period leading up to the elections. There were signs that control was about to get tightened. At the beginning of April, journalist Svetlana Bozic-Kraincanic was expelled and had her salary cut after asking the prime minister, Aleksandar Vucic, a critical question during a press conference. It was election time, Vucic was running to be re-elected. Bozic-Kraincanic touched on a sensitive topic asking him about his ties with the Serbian Radical Party of the recently acquitted war criminal Vojislav Seselj, a party of which Vucic was a member during the 1990s war in former Yugoslavia.

“It is very disturbing that RTV is now transformed into another media that serves the regime of prime minister Aleksandar Vucic,” said Nedim Sejdinovic of NDNV. However, he also sees optimism in the response it has got. “The protests have brought out to the streets of Novi Sad not just journalists, but also citizens themselves,” he added. “The story of journalists became the story of the people. They are coming to the protest to show their growing dissatisfaction with the current government.”

An earlier version of this article incorrectly stated the date of the elections.