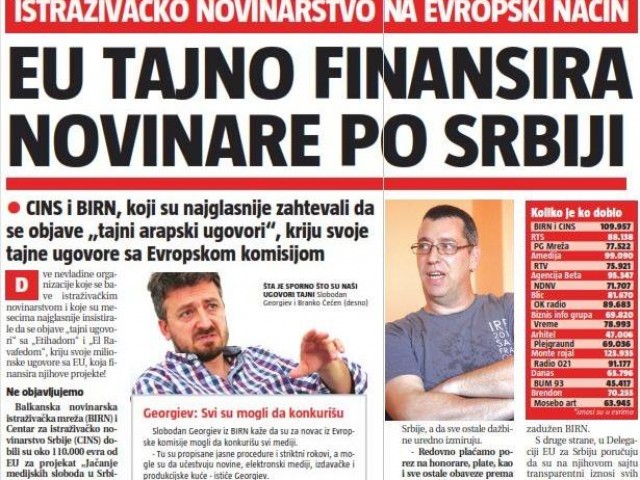 It was a Wednesday morning in early November when investigative journalist Slobodan Georgijev opened Informer, one of Serbia’s notorious tabloids. He had just arrived at his office, the newsroom of Balkan Investigative Reporting Network (BIRN), one of Serbia’s few independent media outlets. When he turned the page he was shocked by what he saw; a picture of his own face amongst two others, in an article calling three media outlets known for critical reporting of the Serbian government, including BIRN, “foreign spies”.

“It was funny and unpleasant at the same time,” Georgijev recalled, speaking to Index on Censorship. “Funny because I knew that this is just a campaign by Informer to undermine the credibility of independent journalists.” More importantly, he had begun worry about his own safety. “It’s also unpleasant because you never know how people will interpret such defamations.”

Several independent media houses — including BIRN, as well as Crime and Corruption Reporting Network (KRIK) and Center for Investigative Journalism Serbia (CINS) — have alleged that pro-government tabloids like Informer are running a smear campaign against them.

The first major incident followed the publication of a story about the cancellation of Prime Minister Aleksandar Vucic’s vacation in August 2015. Informer published an article saying that Vucic was forced to cancel his two day vacation in Serbia due to reporters from BIRN and CINS allegedly booking a room next to his.

The same newspaper also wrote that BIRN and CINS were meeting with European Union representatives on a weekly basis to plan to bring down the government.

“We are basically accused of being financed by the EU to work against our government,” Branko Cecen, director of CINS, told Index on Censorship. Cecen, like Georgiev, was also pictured and called a foreign spy in Informer. “Expressions like ‘foreign mercenaries’ and ‘joint criminal activity against their own state’ have been used.”

Informer newspaper is openly affiliated with the Serbian Progressive Party (SNS) of prime minister Aleksandar Vucic and has frequently been accused of political bias in favour of the party and the prime minister.

CINS, KRIK and BIRN have long reported on what they see as a slew of regular negative articles about themselves in tabloid newspapers with close ties to the government. There is no doubt that the three news outlets are targets because of their critical reporting on the government.

One of BIRN’s stories revealed a contract the Serbian government had signed with the national carrier of United Arab Emirates, Etihad Airways, to take over it’s state-owned counterpart Air Serbia. The deal had been financially damaging for Serbia, which was kept from the public until BIRN obtained and published the contract.

Another story investigated alleged corruption concerning a project for pumping out a flooded coal mine. BIRN found out that Serbia’s state-owned power company had awarded a contract to dewater the mine to a company who’s director is a close friend of the prime minister.

The coal mine revelations led to an angry speech about BIRN by Vucic on national television saying: “Tell those liars that they have lied again(.”

BIRN’s editor-in-chief Gordana Igric told Index on Censorship she sees a resemblance to Serbia’s difficult nineties. “This reminds me of the regime of Slobodan Milosevic, a time when the prime minister also had a prominent role and critical journalists and NGOs were marked as foreign mercenaries,” she said. “What’s happening in Serbia today makes you feel sad and confused.”

Independent journalists find the path that the prime minister is taking alarming. Some compare him with the Turkey’s Recep Tayyip Erdoğan or the Russia’s Vladimir Putin. According to Cecen, the level of freedom of expression is at the lowest level since the time of strongman Milosevic. “There is an aggressive campaign against anybody and anything criticising the prime minister and his policies”, he said. “The prime minister has taken over most media in Serbia, especially national TV networks, but also local ones. His small army of social media commentators is terrorising the internet. It is quite bleak and frustrating.”

Regardless of Vucic’s verbal attacks towards the EU delegation, Serbia has opened the first two chapters in its EU membership negotiation in December 2015. This represents a big step towards eventual membership of the European Union. But the latest progress report on Serbia (November 2015) says the country needs to do much more in terms of fighting corruption, the independence of the judiciary and ensuring media freedom.

“The concern over freedom of expression is always expressed in these reports,” Cecen said. “But we see no influence of such reports since situation with media and freedom of expression is deteriorating daily.” Cecen is disappointed in the European Union’s support for independent media in Serbia and finds that EU officials show too much support for the Serbian government and the prime minister.

After he had seen his own face in the paper, Georgiev picked up the phone and called up Informer’s editor-in-chief Dragan Vučićević to ask for a better picture in the next paper. Georgiev jokes about it and clearly doesn’t let accusations and threats hold him back. “People around me are making jokes”, he said. “They call me a foreign mercenary, an enemy of the state.”

Georgiev pressed charges for defamation against Informer. “We are living in a state of constant emergency,” he continued, concerned about the state of press freedom in his country. “Serbia is not like Turkey. But it goes very fast in that direction.”