“You have to be brave to be a journalist in Serbia” 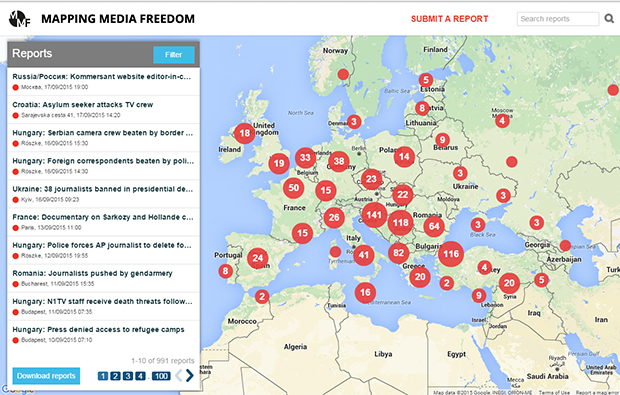 Investigative journalist Ivan Ninic knew something was wrong when he saw the two young men reach down. “I saw they were getting two metal bars,” said Ninic, who is the latest victim of violence against journalists in Serbia. Two young men, in tracksuits and baseball caps, assaulted him on a Thursday evening in late August, in Serbia’s capital, Belgrade. “They attacked me and stuck me brutally,” he told UNS, a Serbian association for journalists. “I have a haematoma under my eye, bruises on the thigh bone and an injury to my shoulder.”

Just a week earlier, at a Jazz Festival in the southern city of Nis, local journalist Predrag Blagojevic was beaten by a police officer for — in the words of the officer — “acting smart”. “He grabbed me, bent my arm behind my back and repeated several times ‘Why are you acting smart?’ Then he hit me in the head with his hand. He hit me twice,” Blagojevic stated after the incident. Blagojevic had been approached by the officer and asked for his identity papers. Blagojevic had asked “why?” The police officer took him to his car and started beating him.

Media freedoms in Serbia are on the decline. The country has been cited in 93 verified violations against the media reported to Index on Censorship’s Mapping Media Freedom project. A recent report by Human Rights Watch (HRW), painted a picture of journalists in several western Balkan countries, working in hostile environments whilst facing threats and intimidation.

“It’s certainly not going forward,” HRW researcher Lydia Gall said in an interview with Index on Censorship. “What in fact should be showing progress, is rather deteriorating.”

Gall interviewed over 80 journalists in Serbia, Kosovo, North Macedonia, Montenegro and Bosnia-Herzegovina. The stories she heard were shocking.

“These are all countries that are transitioning,” she said. “They’re undergoing democratic development in, one would hope, a positive direction. But when you look at the documentation I’ve collected you’ll see a worrying picture unravel.”

The report contains examples of threats, beatings, and even the murder of several journalists. It also claims there is political interference, pressure and a lack of action by the authorities to investigate and prosecute those responsible for crimes against the media.

In Serbia alone Human Rights Watch reported 28 cases of physical attacks, threats, and other types of intimidation against journalists between January and August 2014.

NUNS (the Independent Journalists’ Association of Serbia) has documented a total of 365 physical and verbal assaults, and attacks, in the period from 2008 to 2014. This may be the tip of the iceberg since, according to NUNS, many media workers don’t report attacks.

Between May 2014 and June 2015, Index on Censorship’s Mapping Media Freedom project has received 77 reports of violations against Serbian journalists and media workers.

Most of the targeted journalists investigate corruption and allegations of war crimes. Both Ivan Ninic and Predrag Blagojevic report on corruption on a regular basis. “These are not popular topics in the Balkans,” Lydia Gall said. “There are always people in power trying to get them not to write about them.”

Serbia has undergone incredible change over the past two decades. During the Federal Socialist Republic of Yugoslavia censorship was directly imposed by the state. Few forget the difficulties of reporting in Serbia during the darkest moments of the 1990s. Means and methods of pressure and censorship are very different nowadays.

“It’s not necessarily the state going after the journalist anymore,” Gall explained. “But it’s more the state neglecting to properly investigate crimes against journalists.”

“If it’s not physical interference or abuse, then it’s threats, or so-called friendly advice. In some cases journalists are being sued for civil libel and end up spending most of their time in courts instead of doing their work. It can be done in very subtle ways.”

This all contributes to a hostile environment for journalists to work in, the HRW report concludes. “You have to be a brave person to do this type of reporting in the Balkans,” said Gall.

Sometimes pressure on the media in Serbia is not even that subtle. Current Prime Minister Aleksandar Vucic, has been accused of being overly hostile against the media. He has publicly labeled Balkan Investigative Reporting Network (BIRN) foreign spies . The current government has also been accused by some journalists of involvement in several cyber attacks on critical online media portals, such as Pescanik.

“Improving media freedom is an important condition in Serbia’s negotiation process with the European Union for membership. But EU’s pressure on Serbia is too weak,” said Gall.

“They’re mainly looking at the legislative framework. On paper it looks great. The problem comes to light when you look on the ground. When you speak to journalists, who are living this reality every day.”

Meanwhile the Serbian journalist associations, NUNS and UNS, are trying to put pressure on the authorities to track down the attackers of Ivan Ninic.

Ninic is known for his investigations into corruption within high levels of government. He founded the Center for the Rule of Law, an NGO, and is planning to launch a website to publish investigative reports.

He believes the attack is a warning: “I expect the police will find and punish not only the attackers, but also the masterminds, so that I know who is sending me this message,” he said in a statement.

This article was published on 16 September 2015 at indexoncensorship.org