Home » Bosnia: Police raid is “attack on the public’s right to know and to be informed”

Bosnia: Police raid is “attack on the public’s right to know and to be informed” 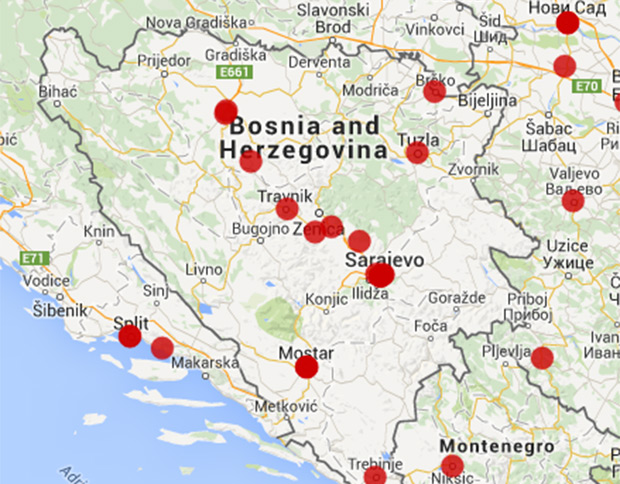 Mapping Media Freedom in Europe: Since May 2014 there have been 18 reported violations in Bosnia.

Press organisations and representatives have strongly condemned a police raid on Bosnia news site Klix.ba that took place on 29 Dec. Authorities are trying to uncover the source of a recording that is said to be of the Republika Srpska Prime Minister Zeljka Cvijanovic.

During the recorded conversation a woman’s voice can be heard admitting that her party bought two MPs to ensure its majority in the national assembly.

Irfan Nefic, a police spokesman, said the raid by about half a dozen police officers was ordered by a Sarajevo court, the Associated Press reported.

The search started at 8.30 am on Monday, 29 December 2014, and lasted more than seven hours. Four Klix.ba workers were held at their offices for questioning. During the investigation police copied materials from the newsroom’s computers. At a post raid press conference, Dario Simic, the portal director, and Jasmin Hadziahmetovic, editor in chief, said that police seized 19 computers hard drives, USB memory flash-sticks, CDs, documents, notes and their private mobile phones.

The raid followed the interrogation of Simic and Hadziahmetovic by Banja Luka police on 4 December 2014. Police had demanded they reveal the identity of the person that gave them the recorded conversation. The journalist and the director of the portal refused to identify their source. The incriminating recording was posted online in mid-November, after the Bosnian general elections, local media reported.

National journalists associations called the raid a dark day for Bosnian journalism and characterized the police action as “attack on the publics’ right to know and to be informed,” said Dario Novalic, the head of the Press Council in Bosnia, a self-regulatory body for print and online media.

Borka Rudic, secretary general of the Bosnian Journalists Association, said that journalists have the right to protect their sources and that the raid is “unacceptable”. “This is the most brutal attack on freedom of speech and journalist rights ever recorded in Bosnia,” Rudic said.

Association of Journalists of the Republika Srpska strongly condemned the police raid and appealed to international organizations to put pressure on local institutions to respect media freedom.

OSCE Representative on Freedom of the Media Dunja Mijatović said that the protection of sources is one of journalists’ key privileges and it must be safeguarded. “Interrogation and pressure on members of the media to reveal their sources is simply unacceptable,” Mijatović said.

She urged the authorities in Bosnia and Herzegovina to do their utmost to stop persecuting journalists and to respect their right to protect their sources.

“This is a grave and disproportionate intrusion into the journalists’ right to report about public interest issues,” Mijatović said. “While fully recognizing the importance of rule of law, I consider this case to constitute unacceptable treatment of the media in a democratic society.”

Al Jazeera Balkans reported that the police are investigating how the media got the recording. Officials suspect that the recording was obtained by unauthorized phone tapping.

After the raid, a police officer struck a photographer with a backpack because he was unhappy he had been photographed. The incident was recorded by a TV station’s cameraman.

For more on media violations in Bosnia, visit mediafreedom.ushahidi.com

This article was posted on Jan 2, 2015 at indexoncensorship.org